Continuing our adventure in recreating restaurant dishes at home, Stephen and I have been working on stir fried Shanghai Rice Cakes with little success. It’s one of our favourite dishes at Shanghai Dim Sum and one we order all the time. I was convinced the vegetable used was a kind of pickled Chinese cabbage. After trying two different brands and variations with seasoning, the flavour just wasn’t right. Stephen thought it was a fresh vegetable but we just couldn’t figure it out. Recently, we ate at Shanghai Dim Sum again with my family and was telling my mom about our unsuccessful cooking attempts. Right away, she named the mysterious greens! But in Mandarin. Luckily my cousin was there to translate and tada, the vegetable was Shepard’s Purse and is usually sold frozen in Asian grocery stores (similar to frozen spinach). With this puzzle piece in place, the rice cakes turned out bang on. 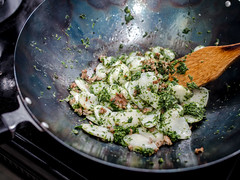 Season the ground pork with the cooking wine, white pepper and salt