Making dumplings from scratch was the only way my mom ever made them. I’ve helped her in the process for as long as I can remember. I would watch her roll out each wrapper and work on folding them. Her rolling always outpaces my wrapping skills. My mom’s dumplings will always be my favourite; steamed, fried or boiled, they always turn out plump and juicy. My wrappers come out a little thinner and still not quite even, I’m working on it.

This recipe is one filling variation but you can stuff the dumplings with pretty much anything. Some variations include: 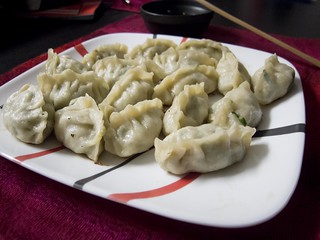 Mince the shrimp, garlic and ginger All the filling ingredients, to be mixed Ring of dough, ready to be cut Cutting the dough into discs From dough disc, to wrapper, to dumpling As they’re being wrapped, keep the dumplings well floured and seperate to prevent them from sticking