If I see Dan Dan Mian on a menu, I’m guaranteed to order it. The simple bowl of noodles topped with minced pork and sweet Sichaun sauce is one of all time favourite dishes. At home, I’ve tried making the noodles using store bought seasoning packages, which come close in flavour, but doesn’t quite replicate the taste of dan dan noodles from my favourite restaurants. After our succesfull attempt at La Zhi Ji Ding, The Hubby was confident he could cook the dish from scratch and tweak the recipe to appeal to my taste buds. I’m a lucky woman. For the most part, we followed this recipe from “The Woks of Life” but made a couple of adjustments based on what we had in our cupboards. The recipe turned out fairly easy, and very delicious. We now also have a jar of homemade chilli oil, that adds a drizzle of goodness to any dish. 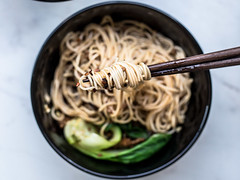 Heat the oil and spices to 160 degrees celsius After letting the oil sit for 5-6mins, remove the cinnamon stick and star anise, add in the crushed red pepper flakes Cook the ground pork until dry